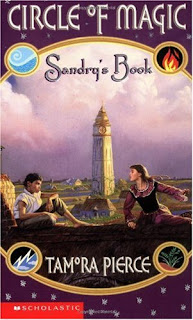 
Summary: When four strange, and strangely talented, youngsters are brought to Winding Circle by master mage Niko they find themselves drawn together in a Circle of Magic—a circle that binds them despite their differences.

This was the first ever Tamora Pierce book that I read and I fell in love with her stuff from that moment on. However, because this was the gateway book, it has always held that higher regard in my mind. Don't get me wrong, I love all of her books (the ones that I've read anyways), but the characters in this book (and series) are just so inviting that I find myself re-reading it more than the other ones.

Sandry's story had be captivated from the very first page and as soon as all the characters were introduced I was completely hooked. This, of course, meant that I devoured the remaining books in the series from the library as soon as I was able to. Then I moved on the anything else Pierce.

Sandry's Book is still my favourite though, even after all the other books that I've read by Tamora Pierce. The entire setting was just so magical - I mean, it is at a mage school - but you grow with the characters as they grow into their abilities.

Anyways, go read this book if you're looking for a fantastic MG-YA book that's full of fantasy, magic, and fun. I give it a rating of 9/10.

*On a side note, I know that this is Friday but I missed several regular posts from this week due to not having wifi where I was, so I'm catching up on my reviews that I missed.
The beach was well worth it, though... I wish that I was there now instead of having to get ready to go to work. Oh well.
Posted by -k