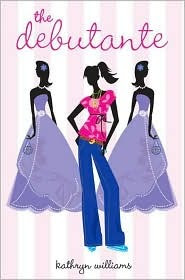 Summary: Annie MacRae’s senior year just went south. Specifically, to Beaufort . . . Alabama. Mere weeks before the start of what’s supposed to be the best year of her high school career, Annie’s parents inform her they are moving to the land of deep fryers, “debs,” and worst of all, her grandmother.

But before she can say “No way, y’all,” Annie finds herself living among the “others” and biding her time till she can head to college and get back on the right side of the Mason-Dixon. The only problem? To get that ticket to college, Annie will have to trade in her jeans for a white debutante dress and learn the true meaning of being a lady.


So, this wasn’t a book that I would have gone out and bought had it of not been only a few dollars at a store that I stumbled across. In fact, I was still a little tentative about buying it, but I figured “what the heck, I need a pool-side read”, so here I am.

That being said, I went into reading this with no expectations at all, which was probably a good thing. It wasn’t that I didn’t enjoy the book, because I did, but only because it was a nice fluffy read for the summer by the water.

Annie was an alright character but she was incredibly forgettable. In fact, I liked her grandmother so much more; that lady had a set of steel ones, let me tell you. Then there were the rest of the characters.

Ok, what I don’t understand is why people do the whole drinking and driving thing. Sure, I can understand that being in the middle of nowhere can prompt strange activities like meeting in the church parking lot to party (I did grow up in the country after all), but, really, did it need to be in there that they get drunk and drive around? Really? Maybe it’s just me, but I just find that deplorable.

That aside, it was interesting to see into the lives of debs while they’re preparing for their debut. I imagine that I would have had the same reaction to it all that Annie did – meaning I wouldn’t have wanted anything to do with it and I would have been snarky about everything. I also really enjoyed the Southern charm of it all; it made me want to move to Alabama and find a nice Southern Gentleman.

Overall, this was a 5/10 book. It was alright, a nice read, but nothing special.
Posted by -k