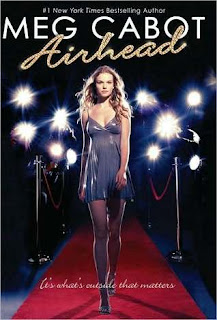 Summary: Emerson Watts, 16 and female, loves playing video games, hanging out with her best friend, Christopher, and has made peace with her less-than-supermodel-esque looks. But when she’s involved in a mysterious accident, she wakes up to find she’s now in the body of...a supermodel. Who was behind this switch? What was the motive? And how can she get Christopher to realize she's still the same person inside?

Admittedly, I didn’t know what to think about this book when I first started to read it. I was a little sceptical and I had my perceived notions, but everything that I thought that it would be went right out the window once I started to read it. I don’t know why but I thought that she became a decoy-type double for a famous person… So not what happened. In fact, all that I could think of while reading this book was how similar it was in theory to Robin Wasserman’s Skinned books; I mean, placing someone’s brain into another body and all that.

However, I really liked reading this book and that showed in how I zipped right through it and how I can’t wait to read the next one (but I HAVE to finish PLLs first).

I liked Emerson’s character and I could completely see how hard it would be to be shoved into someone else’s life without warning.

What I can’t wait to find out in these books is who she ends up with romantically. I’m leaning towards Christopher but I would take Gabriel Luna as well. They just both seem so handsome… at least they do now.

I’m giving this book an 8/10. It was great and if you want a fun summer read, this is probably right up your alley.
Posted by -k

This definitely sounds like one of those fun reads one can easily speed through. Have to admit to not reading many of Meg Cabot's books, but think I should probably get around to reading more of them in the near future.