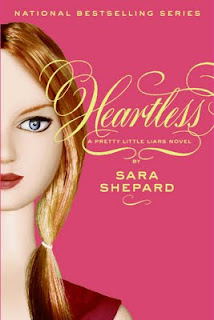 Summary: The newest instalment in Sara Shepard’s bestselling Pretty Little Liars series is packed with juicy drama and delicious surprises that will keep readers guessing to the very end.

Hanna, Aria, Emily, and Spencer have been telling some outrageous tales; only, the proof always seems to go missing. The friends insist they’re telling the truth, but all of Rosewood thinks they’re just out for attention—and nobody likes a girl who cries wolf. So when the big bad killer comes after them, will anyone believe the girls. . . or will they be the next to disappear?

Even though it took me a few days to read this book, but wow, am I ever glad that I just sat down and finished it in one fell swoop.

This book was one of the craziest in the series and it was jammed with so much action and information that my head was spinning a little with it all. In fact, I have to share some information (that doesn’t give away who A is and who killed Ali) because there was just so much.

First, what the heck is up with Darren Wilden being Amish? That was something that I thought could have been left out since it came out of completely nowhere and didn’t add anything to the actual story. It seemed like it was just a nice story-line with him… although it was meant to make you think even more that he was A. Of course, I’m not saying whether or not he is.

Second, where exactly did Ian’s class ring come from? It wasn’t answered and I’m still wondering. Was there even a reason for Aria to find it? I mean, where does that even fit into anything?

And last but not least, what was the point of making Spencer’s dad and Ali’s mother have an affair which resulted in offspring? It was a nice twist but it didn’t need to be there; not really anyways.

Then, on top of everything, there is the worst cliff-hanger of the series in this book. The ending of Killer was bad enough (who was it that Aria pulled out of the burning woods anyways? Was it really Ali?), but this one was so unexpected that I had to re-read about half a page to make sure that what I read was correct. It was just Wow.

Anyways, sorry if I spoiled anything for anyone, but I swear that none of it really has anything to do with who A is. This is a 9/10 book for me and Wanted only adds to the amazingness so stay tuned for that review soon!
Posted by -k