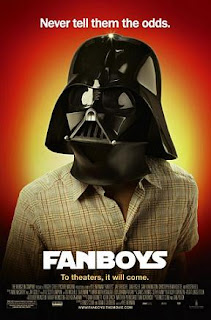 
I’ve been wanting to see this movie for a while; it was one that I would occasionally stumble across online and I would then think “I still need to watch this” only to promptly forget within a few minutes. Thankfully, I was off work early today and looking for something to watch after dinner and there it was on the movie channel.

Now, I’m not a huge Star Wars fan but I do enjoy the movies – the classic, original ones and not the trash that came out in the last decade. Lucas should be shot for those… Point is, I’m not one of those die-hard fans who fantasizes about Han Solo (*sigh* gorgeous Harrison Ford in his younger days) but I was roped into the thrill of the entire journey to seeing the first episode before it hit theatres.

All in all, this was a nice way to wind down from a day of work and just get lost in the hilarious and completely impossible situations that are portrayed in this movie. I’m giving is a 7/10.
Posted by -k