Ok, so I’m going to attempt to put my goldfish-like memory to the test and relay everything from the past week. Last year I was so on top of things and wrote a post every night but this year... yeah, not so much. Oh well, here goes – The beginning!


So Saturday morning started off early and getting up to get to the airport and, before that, taking poor Sophie over to the neighbours to puppysit for the week. Is it weird that I so just want to get home so that I can watch Pretty Little Liars season two (which I just bought) and snuggle with her?


Anyway, once we – my mother and her bf stowed away on the trip with me – were at the airport it was a lot of sitting and waiting. Of course, during our time there I was picked on by security. Oh yes, I was privy to the pat-down (I’ve heard rumours that they can see your underoos in that x-ray machine) and set off the security alarms because I was a dumb-ass and forgot to take off my watch and bracelet. Experienced traveller I apparently am not.


So, after all that and a quick up-down flight from Ottawa to NYC, I was greeted in the city by Jake Gyllenhaal. Ok, that’s a bit of a lie, but I did see him at LaGuardia while making my way out. He was going through security. I did a triple-take at the hotness before I was sure it was him. I wish now that I hadn’t tried to play it cool and just went up and took a picture. But, alas, I tried to be all unaffected while furiously whispering to my mother who that hot guy in the grey t-shirt was. She was unaffected.


After that was a relatively uneventful taxi ride and check-in at the hotel. I was just so happy to be in the city that I dropped everything and demanded food and shopping. TGIFridays it was and we went to buy shitteous pay-as-you-go cell phones at Kmart.


Side note here for fellow Canadians – don’t try and “save money” by buying one of these things. Never in my life have I had more problems with a phone. The entire week I have just been wishing for my purple blackberry and a way of communicating with people that wasn’t twitter or facebook. I effing HATE facebook. Luckily I went out and bought a new iPod touch to replace my seriously dated two gig nano the next day so wifi was at my touch whenever available!


But I’m getting off track.


So Sunday was my attempt to get to the circus in Queens where first I forgot out tickets (thankfully to realize as soon as we were in our first cab and still at the hotel) and then there was some street party thing going on so our amazing cabbie took us the long way around – and had a GPS that must have been a cousin to my phone because it wasn’t working either. Thankfully both he and I had common sense and a good sense of direction so we made it to the park where the circus was being held without a problem.


Let me tell you, if you’re ever able to see the Big Apple Circus make sure that you do! I know I’ve been to a circus before but I don’t remember it and this one was so amazingly good! I will be going back if I ever can. Also, if I ever figure out how to get the photos off my phone I’ll post them.


After the Circus and asking the locals where we could get a bus/subway back to Manhattan (and then walking in the rain to said bus stop) we met with my cousins for dinner. And we went to the Lego store at Rockefeller Center. I don’t remember where we went for dinner, but it was around there and was famous for their burgers. I had boneless chicken wings...


So to sum up, Sunday consisted of a lot of walking and fun times. But the real fun started Monday!

Also, on another side note - it's effing hard to type on a train! And I'll add photos later to go with the post.
Posted by -k 2 comments:

This Is Why I Love You

Yay! You’re here for my stop in the 30 Days of Daemon BlogTour! Today’s topic is the many reasons whyI love Daemon! 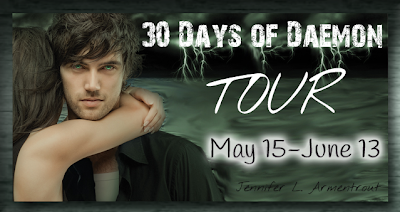 
First off, he’s a total ass. But he’s such a loveable ass that it makes it all ok. I know that this makes me sound a little insipid but give me a minute. See, he’s an ass in order to firm a barrier between him and all humans. After all, they say that sarcasm and being a jerk is the best defense and Daemon does that in spades.  But as you get to know his character you find out just how amazing he is!


Next, he tries to always do the best thing for his family and his people – even when it means not giving himself what he really wants. He’s rather selfless that way and you have to give the guy a hand for having that kind of power over his libido.


He’s infuriating! I don’t think that I’ve read a male character who made me as angry as Daemon does!  You think he’s about to do one thing and then he turns around and does the complete opposite!


And finally, he’s one BAMF!!! Seriously, that right there is almost reason enough to love him. He’s the Neville Longbottom of the alien world.


So those are the reasons that I love Daemon Black. I have to say that I am so excited for the Onyx release (I have my copy pre-ordered along with a copy of Shadows) just so that I can own more of Daemon.


If you haven’t checked out this series yet – go now! You can start by reading my review of book one, Obsidian, right here. Trust me, this is one series that you won’t regret reading. And, if you’re a book blogger, you’ll especially love the inner blogger speak!


For the other stop in the tour today, visit Kindle And Me! Also, for more stops in the Daemon tour, you can see the entire list here.
Posted by -k 1 comment: