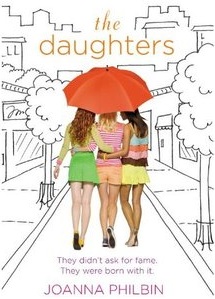 Summary: The only daughter of supermodel Katia Summers, witty and thoughtful Lizzie Summers likes to stick to the sidelines.

The sole heir to Metronome Media and the daughter of billionaire Karl Jurgensen, outspoken Carina Jurgensen would rather climb mountains than social ladders.

Daughter of chart-topping pop icon Holla Jones, stylish and sensitive Hudson Jones is on the brink of her own music breakthrough.

By the time freshman year begins, unconventional-looking Lizzie Summers has come to expect fawning photographers and adoring fans to surround her gorgeous supermodel mother. But when Lizzie is approached by a fashion photographer who believes she’s “the new face of beauty,” Lizzie surprises herself and her family by becoming the newest Summers woman to capture the media spotlight.

In this debut young adult series tailored for younger teens, author Joanna Philbin explores what it’s really like to grow up in the thick of the celebrity world. As Lizzie and her two best friends (and fellow daughters-of-celebrities) juggle normal high school events with glamorous family functions, they discover the pitfalls of fame and the importance of friendship.

Ok, so this was one of those books that I really didn’t care for and I only finished reading so that I could know what happened. But, really, had I of not finished it I don’t think that there would have been that large of difference. Either way, I’ll probably find myself reading the next book just to see where it goes and whether or not it gets better.

See, this is what happens when the spawn of celebrities write books. Some, a very few at that, are able to push past the idea that they’re entitled and therefore should have a book deal handed to them. Others, sort of like this author who can boast that her father is Regis Philbin, didn’t really make the cut. Sure, it was a nice idea – in the way that Nicole Richie and Lauren Conrad take their celebrity lives and translate them into “fiction” – but reading about the kids of celebrities who are, of course, best friends because no one else understand them (blah blah blah) is not only boring but leaves you thinking what the hell do you have to whine about?”

This book was exactly like that. The main character whose mother is this famous supermodel is, of course (how all stories like this must be), ugly and not as beautiful as her maternal DNA should have allowed because she gets her looks from her father who is successful in his own right but rather homely and just the type of person that the most beautiful woman in the world would have settled down and married. And, of course, said main character hates that her mother places her in the spotlight with her, only succeeding in showing just how truly ugly (yeah, right) she is. Oh my god it all makes me want to rip my eyes out and donate them as a chew-toy.

I’m not saying that all celebrity children are gorgeous specimens that inherited every bit of delight that their parents had to offer. But they all go through their awkward phases where they haven’t grown into their knees, ears, noses, add-random-body-part-here; we all go through those phases in life. And if you’re just entering the ninth grade, like our main character, of course you’re going to be awkward with ‘horrible hair’ and ‘too large eyes’ and ‘spindly legs’.

In all, this book provided exactly what the inside cover boasted; incessant tripe that’s trying to ride the coat-tails of Gossip Girl and other celebrity reality shows all while the spawn of a celebrity can try her hat at something that she’s not good at. Hopefully she didn’t give up her day job... if she even had one to begin with.

So, if you’re looking for a brainless read about non-important or interesting things, go for it. If you’re incredibly shallow, this could be the book for you. Or, if you just want to melt a few IQ point off, this will get that done if only temporarily. Personally, I would never read it again... but it did succeed in sucking me into its black hole so I might just read the next one. I give it a 3/10. I shouldn’t have wasted my money...
Posted by -k