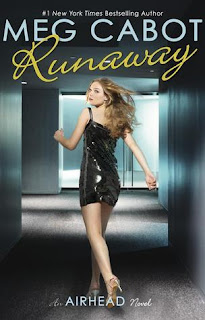 
Summary: Emerson Watts is on the run: from school, from work, from her family, from her friends, from herself.

With everyone she loves furious with her for something she can't explain, and nothing but the live Stark Angel fashion show on New Year's Eve to look forward to, Em's reached the end of her rope... what's the point of even going on?

But when she discovers the truth about Nikki's secret, she knows there's only one person she can turn to.

Will Christopher be able to put aside his personal feelings and help her expose her employer to the world? Is it even fair to get Christopher involved—since if he agrees, there's every chance that Stark Enterprises will try to have them both killed—this time, permanently?

Maybe it would be better for Em to just keep on running.

So, I saw this at the library and I caved on reading it. I was going to hold out until I bought the paperback (to match the other two), but I decided WTH. So here I am.

I thought that this book was a good ending to the entire trilogy, though everything was tied up almost too nicely... but at the same time it didn't leave me with any questions.

This book also made me realize just how much I hate Nikki (the original). She's just so superficial and I'm sorry but if you spend so much time doing make-up and fashion, would be so stupid and not wear the right fit and colour for their body. Also, why would a person be so opposed to change when, as a model, change is what they do every day. And then, oh surprise surprise, but when she's forced into a make-over she completely accepts it and loves it. Her character was just so infuriating! I didn't care much for Christoper either...

But Em, I love Em as a character. She's so fun and smart; that bit with the slow-burning starter that lit the car on fire? Genius.

Overall, this was a god end for the books. I really enjoyed the series, and though the first book was the best in my eyes this one still stood up to the set standard for Meg Cabot books. I give it an 8/10.
Posted by -k