First off, I think that I’ve died and went to a hell where there’s only dial-up Internet that takes forever to load even google… Seriously, I need me some high-speed and a computer that’s not a dinosaur in order to continue on.


However, I said that I would try to post a new review tonight, and here I am.

Seriously, though, Windows 95 should be taken outside and shot…

Anyways, on with the review! 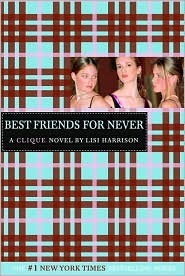 Released: I’m going to update this later because I think it would be tomorrow night before the Goodreads page would open.

Summary: Basically, it’s take two of The Clique girls. There’s a new girl who’s back to school who makes fast friends with Alicia. Massie and Claire must team-up to host a boy-girl Halloween party, but for Massie there’s no “Claire” in co-host. And Kristin and Dylan are fighting over a boy. Oh, and there’s a fashion walk-off specifically to decide what the new OCD uniforms will look like.

So, I got this book out from the library in order to continue reading this series and since I skipped over books two and three, this one was the automatic choice when it came down to it. After all, I hate reading a series out of order.

I have to admit that it wasn’t horrible, but it follower the general outlay that all Clique books tend to have; Massie hates Claire, someone tried to usurp Massie, Laine is a total weirdo, and it all generally works out in the end. And there must be boy drama or else nothing has been accomplished.

These books, while making me feel incredibly old, also allow for me to forget about adult life and pretend to be a kid again for a couple of hours. They’re full of childish problems and dilemmas that really have no bearing in the real life, but at the time I can also remember how they were the most devastating things to ever happen. In that way, these books are pure gold for us slightly above YA age group.

This book in particular was quite funny and it actually gave me some ideas for Halloween costumes, which is right around the corner and I can’t wait since it’s my favourite holiday of they year. It’s definitely a book (along with the series in general as far as I’ve read) that I would introduce to my younger cousins and be all “have-at-it”. For me, though, it’s a 5/10; a fun read to whisk me away from adulthood, but really nothing that I would choose to read again unless I was reading it to said younger cousins.
Posted by -k