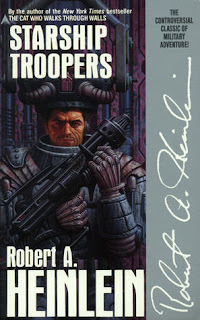 Written by: Robert A. Heinlein

Released: May 15, 1987 by Ace/Berkley Publishing Group


Summary: Juan Rico signed up with the Federal Service on a lark, but despite the hardships and rigorous training, he finds himself determined to make it as a cap trooper. In boot camp he will learn how to become a soldier, but when he graduates and war comes (as it always does for soldiers), he will learn why he is a soldier. Many consider this Hugo Award winner to be Robert Heinlein's finest work, and with good reason. Forget the battle scenes and high-tech weapons (though this novel has them)--this is Heinlein at the top of his game talking people and politics.

This was one of the few books that I had to read for my Science Fiction course in university which I actually enjoyed reading and I'm not really sure why. Normally, I am far from a person who likes to read war books, especially those with a lot of war jargon, and the fact that it's set in space adds this whole other element to it that I would never go for unless forced. Somehow this book made it work and made me want to continue reading it.

I really don't know what else to say about it without giving too much away, but this book has parts that make you sit on the edge of your seat and parts that make you yell at the main character to get his but out from inside his head and be a man. It has action and adventure and is well worth checking out from your library. I give it a 6/10.
Posted by -k