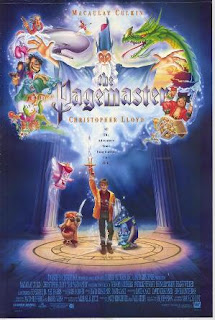 Rating: PG in Ontario but G in other provinces. Go figure...


Summary: A cowardly boy who buries himself in accident statistics enters a library to escape a storm only to be transformed into an animated illustration by the Pagemaster. He has to work through obstacles from classic books to return to real life.

I loved this movie growing up. Then again, even way back then I was completely enamoured with books and reading. I recently re-watched the movie after I found it in a $5.00 bin at Wal-Mart and completely bought it and I realized that it has so many more literary references than I ever realized when I was younger. Plus, watching it as an adult I finally understood the adult references that I would have never picked up on before.

I had wanted to share this movie with the kids that I worked with all summer during the weekly movie nights, but I kept forgetting to bring it with me, which is too bad since its fantastic. It really is one of those movies that completely encompasses what children's movies from the '90s were like. I'm giving it an 8/10. It's a great movie t share with the younger generation who probably has never heard about this movie. Which is a real shame.
Posted by -k