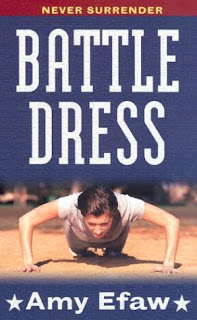 
Summary: Andi Davis is looking for an escape from her disorganized, dysfunctional home life, and West Point seems the only logical way out. Andi figures that given everything she has had to put up with at home, West Point will be a breeze. But nothing could have prepared her for the first six weeks of cadet training, better known as Beast.

Andi is screamed at, belittled, and worn down during the long, grueling training that is designed to break cadets and then rebuild them into soldiers. The upper class cadets bark orders so fast that her head spins, and the fact that she is one of only two girls in her platoon makes things even more difficult. But Andi decides that anything is better than going home, anything.

This first novel by Amy Efaw, a West Point Class of 1989 graduate, is a powerful and gripping look at an intensely private community with its own rules and regulations. It shows us the terrors and triumphs of those who want to belong to a team.


First off, Andi is the type of girl who I wish I was. She's mentally and physically strong, she's compassionate while still being a realist and she just has this inner strength that I don't think many people could ever have.

Andi aside, this book was really interesting to read while captivating my attention - I read it in one sitting while I should have been sleeping or preparing for work the next morning - and making me want to know what happens next. I wish that there was a second book to this that follows Andi after boot camp and into her actual years of school and service.

It was interesting to read this book, a YA book, which didn't seem to follow the usual sub-plot that YA books generally tend to follow. I.E. There was no romance; at all. I'm not wrong, am I, that romance almost always factors into a YA plot? I just found that a bit peculiar and yet it was a little refreshing that the main character wasn't stupidly head over heels for some just-met mysterious loner boy.

Another thing that threw me for a loop with this book were the ages of the other characters in Andi's group (platoon, battalion?); it seemed as though they ranged in age from seventeen to early thirties. At first I was picturing everyone as college-aged freshmen, but then it came out that someone was already in their twenties and I had to re-read the paragraph and then re-process the characters in my head.

Overall, I really enjoyed reading this; it was different than anything that I've read in quite a while and it's something that I believe that I would like to read more of. I give it a well-deserved 8/10.
Posted by -k