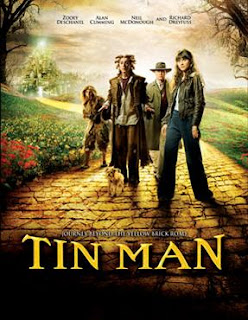 
Summary: DG is all grown up and bored. She mopes around, works as a waitress, and goes to school part time. Before she knows it she's back in the O.Z. (a.k.a. Outer Zone) and on the run from the evil sorceress Azkadellia and her storm troopers and clumsy bats. Along the way she falls in with some strange characters including the brainless Glitch, Raw, a cowardly and psychic lion-man hybrid, and, in the largest deviation, Wyatt Cain, a cowboy cop from Central City called a "tin man" because of his tin badge.

When I first saw this miniseries at the library I knew that I had to borrow it and watch it ASAP - which I did.

This was one of the best miniseries that I have ever watched; it's right up there with the 10th Kingdom. In fact, I would go as far as saying that at this point they're tied for first.

The reason that this was so amazing was how the writers were able to take the original stories and turn them completely around to construct something that's totally new yet still holds on to the basic form of the original. You still have the yellow brick road, the characters that you love, and the great city, but the way that they're twisted is something that you really need to see to appreciate.

There's really not much else that I can say about this except that I definitely am going to hunt down a copy for myself (along with the 10th Kingdom now that I lost the copy that was on my old computer) because this is the type of entertainment that I would watch again and again. I give it a definite 10/10.
Posted by -k

Oh you've seen it????I have it but I have not watched it yet!But since you say it's that good, I'll definitely give it a try!