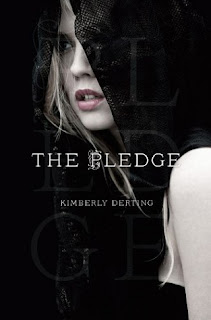 
Summary: In the violent country of Ludania, the classes are strictly divided by the language they speak. The smallest transgression, like looking a member of a higher class in the eye while they are speaking their native tongue, results in immediate execution. Seventeen-year-old Charlaina has always been able to understand the languages of all classes, and she's spent her life trying to hide her secret. The only place she can really be free is the drug-fueled underground clubs where people go to shake off the oppressive rules of the world they live in. It's there that she meets a beautiful and mysterious boy named Max who speaks a language she's never heard before . . . and her secret is almost exposed.
Charlie is intensely attracted to Max, even though she can't be sure where his real loyalties lie. As the emergency drills give way to real crisis and the violence escalates, it becomes clear that Charlie is the key to something much bigger: her country's only chance for freedom from the terrible power of a deadly regime.

I was so excited to read this novel when I saw it in the Simon and Schuster Galley Grab e-mail from October. It was one that interested me for a quite while but I wasn’t sure if I would like it or not so I put it on the back burner and never really thought about wanting to read it. However, I would always find myself coming back to it and wondering just how a novel would turn out with a summary like that. So I jumped at the chance to read it and boy was I not disappointed!
From summary to page the book isn’t done justice. I was expecting something a little more Paris Hilton and instead got a lot more like Katniss Everdeen, which was amazing. I loved the direction that the plot took and I thought that the difference between languages was a great twist on everything.
Charlie was an amazing character. She has this huge secret, is incredibly loyal to her friends, and loves her family – especially her little sister. I wanted her to succeed at whatever was thrown at her, especially if that was a romance with a mysterious loner dude.
The ending was what really made me love this novel. After a slew of annoyingly horrible cliff-hanger endings this novel blew them all out of the water by wrapping things up nicely while leaving just enough left unanswered to make me want to read the next novel. But I was satisfied, and that's what mattered.
I don’t want to give too much away with this one since a lot rests on the element of surprise and good plot twists. Let’s just say that it’s an amazing read and is definitely one that should be on your “to read” list. I’m giving it an 8.5/10 and I can’t wait for the next novel!

Many thanks to Simon and Schuster for allowing me the opportunity to read this via Galley Grab!

Great review! I'll have to pick up this book!