So You Want to Marry a Vampire 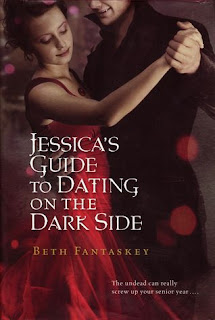 Jessica’s Guide to Dating on the Dark Side
Written by: Beth Fantaskey
Released: February 1, 2009 by Harcourt

Summary: The undead can really screw up your senior year ...
Marrying a vampire definitely doesn’t fit into Jessica Packwood’s senior year “get-a-life” plan. But then a bizarre (and incredibly hot) new exchange student named Lucius Vladescu shows up, claiming that Jessica is a Romanian vampire princess by birth—and he’s her long-lost fiancé. Armed with newfound confidence and a copy of Growing Up Undead: A Teen Vampire’s Guide to Dating, Health, and Emotions, Jessica makes a dramatic transition from average American teenager to glam European vampire princess. But when a devious cheerleader sets her sights on Lucius, Jess finds herself fighting to win back her wayward prince, stop a global vampire war—and save Lucius’s soul from eternal destruction.

Ok, I’m going to admit that I never really cared about reading this book when it first came out. In fact, I remember seeing it on the shelf at work and scoffing at the title before never giving it a second glance. However, I was in one of my favourite used bookstores in London and saw this hardcover sitting on the shelf for something like $5 and I thought “what the hell”. From there is sat and sat on my shelf until last month.
See, when I was in NYC for BEA I was strolling through the Harcourt booth and I overheard a girl ask if they had ARCs of Jessica Rules the Dark Side. I was in book-trolling mode and when the Harcourt employee produced some lovely advanced copies I stealthily asked for a copy like a ninja. I think I may have annoyed the Harcourt lady... but I was in ninja mode so it’s all good.
Then we come to September where I was looking for a cute fun, easy read and ultimately no-thinking required. I took pity on this little book and I am so glad that I did!
Jessica’s Guide is such a cute book. I fell in love with the characters as soon as I started to read and it kept me guessing as to how things would play out. Was there going to be a happily ever after? (Ok, well I knew there would be since I had the sequel on my shelf...) Would Jessica become a full vampire? (Again, I have the sequel BUT STILL!) I was on the edge of my seat for quite a while and especially near the end.
I thought that the pacing of this novel was really well done. I didn’t feel as though things were rushed but I also didn’t think that they dragged out too much. For the development of the characters and their relationships I thought that everything was perfectly done. Especially Lucius and Jessica’s romance; I knew that they would be together in the end but I liked how the romance wasn’t instant and kept the reader wondering up until the very end if it was real.
In short, this was like a better version of Twilight minus the bogus sparkling vampires.
I greatly enjoyed this novel from start to finish and it made me a fan of Beth Fantaskey out of me. It also made me incredibly excited to read the next novel! It was exactly what I wanted to read – cute, fluffy, paranormal romance – and it kept me more than entertained for an afternoon. I’m giving this novel a 7.5/10 and a high recommendation to read if it sounds like your kind of book!
Posted by -k

I just loved this book ! So cute and funny ! I can't wait to read the sequel !