I have wifi while on vacation and while looking at upcoming releases on the Chapters website I came across this; 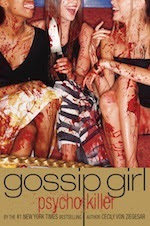 Summary: Welcome to New York City's Upper East Side, where my friends and I live, go to school, play, and sleep-sometimes with each other. It's a luxe life, but someone's got to live it . . . until they die.

Just as in the original story, Serena returns from boarding school hoping to make amends with her BFF Blair Waldorf--things just haven't been the same since Nate Archibald came between them. But here's where our dark tale takes a turn: Serena decides that the only way for her to make things right with Blair is to eliminate Nate. If that means killing him, well, c'est la vie. Her attempted murder doesn't go unnoticed by Blair, however, who isn't about to let Serena kill whoever she wants-not when there's Cyrus Rose and Chuck Bass and Titi Coates and everyone else who's ever irritated Blair to get rid of first . . . .
American Psycho's Patrick Bateman has met his match in Manhattan's newest, most fabulous trendsetting serial killers, Blair Waldorf and Serena van der Woodsen.

That is all.
Posted by -k