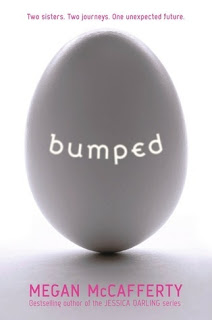 Summary: When a virus makes everyone over the age of eighteen infertile, would-be parents are forced to pay teen girls to conceive and give birth to their children, making teens the most prized members of society.

Sixteen-year-old identical twins Melody and Harmony were separated at birth and had never met until the day Harmony shows up on Melody’s doorstep. Until now, the twins have followed completely opposite paths. Melody has scored an enviable conception contract with a couple called the Jaydens. While they are searching for the perfect partner for Melody to bump with, she is fighting her attraction to her best friend Zen, who is way too short for the job.

Harmony has spent her whole life in religious Goodside, preparing to be a wife and mother. She believes her calling is to bring Melody back to Goodside and convince her that “pregging” for profit is a sin. But Harmony has secrets of her own that she is running from.

When Melody is finally matched with the world-famous, genetically flawless Jondoe, both girls’ lives are changed forever. A case of mistaken identity takes them on a journey neither could have ever imagined, one that makes Melody and Harmony realize they have so much more than just DNA in common.

I really felt as though this could have concluded better than it did – meaning that it could have included the second novel. But, I’m also biased because I really just want to find out what happens next.

It took me a while to get into the flow of alternating chapter perspectives between Harmony and Melody. While I liked the tactic to see into how the other twin was thinking, I found myself dreading the Harmony chapters in the beginning. While I really grew to like her in later chapters, the first few had her incredibly preachy and just way too good. Melody, on the other hand, I kept flitting back and forth on whether or not I liked her as a character.

The novel itself is beautifully written and because of that the conflicting issues are really brought forth in this unique light. The idea that all forms of birth control were illegal was something that really made me think. That paired with the idea that girls as young as 12 were popping out babies because they were paid to do so and that there were scholarships centred around this, it made me a little ill. But through how it was written, I was completely able to see both sides of the argument. I may not like all the arguments, but I can clearly see them.

This was a great YA debut for 2011. It’s interesting, fresh, and plays brilliantly on the growing dystopia trend. It takes real problems that we have now and twists them into something grotesque that captivates us so completely that we can’t look away. I cannot wait to read the next in the series and I can only imagine that it will be even better than this. I’m giving this novel a 9/10. Be sure to add it to your lists.

Thank you to everyone at netGalley and Harper Collins for allowing me to read an advanced copy of this novel.
Posted by -k

I also wanted a couple of more answers at the end, but was satisfied once I flipped to the next pages and saw that there would be a sequel. I just hope it comes soon:)