The Vampire in the Cemetery 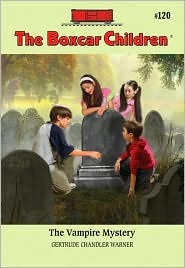 My thanks to NetGalley and Open Road for allowing me the opportunity to read this e-book.

Summary: The Aldens meet Mr. Hudson, a local author who is best known for his novel about a vampire. But rumours of a real vampire are going around town - a vampire who haunts the graveyard behind Mr. Hudson's house! But since vampires don't exist, the children soon realize that someone must be trying to scare people away from Greenfield! Who brought the old legend back to life - and why?

Oh these Boxcar Children books take me back. I don’t know if the books have necessarily become shorter or I’ve just become a faster reader, but I remember it taking all afternoon to read one of these novels when I was little. I sped through this novel in less than a half hour and thought that I could have definitely read it faster if I so wanted.
Reading these novels years later, it’s nice to see that while the writer has taken the characters into the current decade without losing the foundation that both the books and the characters were built on.
One thing that I’m not too keen on is the language used. Of don’t get me wrong, there’s nothing but squeaky clean stuff here, but in order to appeal to today’s kids the stiff formal language really needs to be updated more. In a world where today’s youth is playing COD and watching Jersey Shore – yeah, these books aren’t going to be snatched off the shelves by anyone other than ultra-conservative parents.
But onto the novel itself.
The mystery was cute and perfect for the Halloween season. While I felt as though everything were rather rushed (inevitable from the short length of the novel) I can see where it was meant to keep the attention of its targeted audience.
In the end, I like how I can dip back into my inner child (more than I already do) by reading these types of novels and this one didn’t disappoint in that respect. However, there’s only so far a person can retreat into childhood and this was just a little too much. Yes, I would buy it for young cousins whose parents are a little too strict. In the end, I’m only giving this a 4/10 and a recommendation for very young readers.
Posted by -k