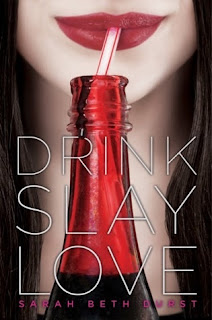 Summary: Pearl is a sixteen-year-old vampire... fond of blood, allergic to sunlight, and mostly evil... until the night a sparkly unicorn stabs her through the heart with his horn. Oops.

Her family thinks she was attacked by a vampire hunter (because, obviously, unicorns don't exist), and they're shocked she survived. They're even more shocked when Pearl discovers she can now withstand the sun. But they quickly find a way to make use of her new talent. The Vampire King of New England has chosen Pearl's family to host his feast. If Pearl enrols in high school, she can make lots of human friends and lure them to the King's feast -- as the entrees.

The only problem? Pearl's starting to feel the twinges of a conscience. How can she serve up her new friends—especially the cute guy who makes her fangs ache—to be slaughtered? Then again, she's definitely dead if she lets down her family. What's a sunlight-loving vamp to do?

Ok, I’m going to admit that I’m relatively over the entire vampire fad (thanks Twilight!) however I had heard amazing things about this novel – mainly that it was rather funny – and so I gave it a chance. Thankfully I wasn’t disappointed.
I sped through this novel as fast as my work schedule allowed me to and loved every minute of it. Hell, the damn book influenced me so much that it entered into my dreams. Seriously, I was dreaming of vampire homes with secret a passage disguised as a bathroom which led to the underground living quarters. There were also sparkling vampire hunters though I can’t verify that there was anything unicornish about them.
I loved Pearl as a character. She was feisty and so full of life in her undead state. It was funny to read about her making her high school friends and navigating her way through what would be an ordinary day for anyone else. But what was really amazing was reading the description of that first day of sunlight. Durst has this amazing way or writing so that you can really feel the wonder and awe of the moment.
This was the first novel that I’ve read by Sarah Beth Durst but it won’t be my last by far. I’m giving this novel an 8.5/10 and I’m definitely going to be purchasing this one soon!

My thanks to Simon and Schuster’s Galley Grab for allowing me the opportunity to read this novel before publication!
Fair warning, I read this book way before I wrote this review and by the time that I got around to writing it my e-galley from Simon and Schuster had expired. So forgive me if my details are a little off as I have nothing first-hand to refer to.
Posted by -k

I'm glad you liked it. I loved Pearl. Haha and love your title :)

I'm glad you liked it. I loved Pearl.